There are 11 Irish Railway Review DVDs. Too many for one page ...

The Sligo Line - we travel further along the line to see how new signalling and rolling stock have changed things over the past two years.

Around Castlerock - NIR’s last semaphore signals in regular use guard this station and the spectacular cliff scenery at nearby Downhill.

Locos on the Mayo Lines - GMs in action in 2006 during the last days of semaphores.

Network Notes - ranges over the system from Ballymoney to Banteer to see the return of the Gatwicks, a ballast train at work, the Sperry wagon, 80 class, and more.

The Last Campaign - 2005 was the final sugar beet campaign, and we say farewell during what was one of the most efficient seasons of rail traffic in recent years.

Cravens in the Cork Area - classic rolling stock on the Mallow and Tralee locals.

The Galway Line - now that mini-CTC has been in operation for some time, we see if things have changed for the better

Network Notes - we take a look at rolling stock around the system, including finding the 29000, 2700, and 80 class units at work, and a look at the RPSI Mark 2 coaches being hauled by the elusive 8113, NIR’s best kept secret.

Gormanston - this ex-GNR station has classic features and a modern passenger service provided by a variety of rolling stock (with Tara, Cement and Liner freight trains too).

The Fall and rise of Liner Trains - as IE pull out of liners we see the last days of the container trains in County Cork (minus containers!), and the Norfolk Liner returns heavy boxes to the IÉ system.

Rolling Stock Test - we compare Cravens, Mark 2s and Mark 3s in Mayo. Taking the passenger perspective, we buy our ticket and travel on all three types of rolling stock.

Western Stations Re-emerge - we travel along the Western Rail Corridor to see several stations which have reappeared, and some which have refused to vanish.

Hell’s Kitchen Museum - We visit the only pub in the world with an engine in the bar. 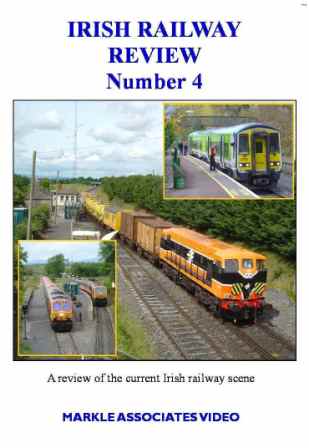 The Mayo lines - we travel along from Portarlington to Ballina, seeing various passenger and freight trains along the way. Featured trains include NIR’s 8208 at Tullamore, 201 Class locos on the Ballina branch trains, and freight as diverse as the Tullamore cement, the Ballina Liner, the Westport timber and the Norfolk liner to Waterford.

Network Notes - we get our first look at the LUAS tram system in Dublin, the saga of the Lisburn to Antrim branch goes on, Cahir viaduct is back in operation, we search out some 141s and find a 121 Class still running, the Dublin suburban network finds a new terminus, we see some rarely photographed liner trains …. and more.

The Cork Area - shows the new daytime Charleville service, just before it was cancelled, and locos and railcars between Mallow and Cobh.

New Railcars and Old Trains - features the decidedly worn NIR railcar fleet and the new CAF units on trial, 071 class locos giving way to railcars on the ex-DSER, and 141s being replaced by railcars on the routes served by Limerick shed.

NIR Then and Now -we catch a glimpse of Poyntzpass before and after modernisation.

And finally …  we find NIR’s 112 working hard between the Wexford sugar fields.

Irish Railway Review is a roundup of developments on Irish 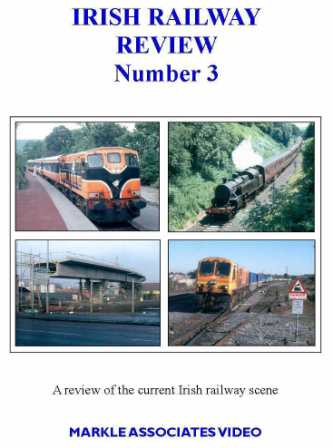 Railways, issued on an occasional basis. It includes two features in each edition, as well as “Network Notes“, a topical feature on recent changes to the Irish Railway scene. Finally, “NIR Then and Now” looks back at how Northern Ireland Railways has changed over the years.

The Waterford Area - we travel along the three lines serving Waterford City. Filmed prior to the Cahir bridge collapse, we see main and branch line passenger trains, and new freight in the shape of timber and liner trains

Lisburn to Antrim Closure - This line has been closed to passengers, and we see the route in its last months. Steam specials are featured on the last day, together with the very low-key final train.

NIR Then and Now - We carry on from where we left off in IRR2—the Cross Harbour Link line from Yorkgate to Lagan Junction is seen under construction and we travel along the line to get a driver’s eye view.

Network Notes Special - The aftermath of the Cahir Bridge collapsed is considered. We see the damaged bridge, and diverted Sugar Beet and Cement trains.

This DVD features:
The Limerick Area - see the action in the West, passenger trains to Limerick Junction, Ennis and Roscrea, and freight between the Cement factory and Kilmastulla
Portarlington - a new location for Markle, but certainly well worth a visit.
Network Notes - new liveries for old coaches, the new station at Monasterevan, Heuston developments, IÉ freight in decline, Mossley West opens at last, line blockages at Downhill and the ex-Gatwick stock in action.
NIR Then and Now - current and archive shots of Belfast Termini, York Road, York Gate, Queen’s Quay and Great Victoria Street. 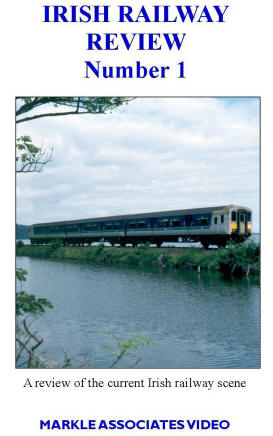 This tape features a review of the Irish railway scene, concentrating on four areas:

Dublin Area Developments - new trains and stations on the Dublin Area Rapid Transit (DART) system
Antrim by two routes - both the ex-GNR and the ex-NCC routes between Antrim are currently open for traffic, but for how much longer?
The Sligo Line - we see trains and new stations between Dublin and Longford
NIR Then and Now - current and archive shots of the Larne line.


Locations covered include such diverse spots as the established stations at Booterstown in South Dublin and Antrim. New stations include Mossley West in County Antrim and Clontarf Road in Dublin. Trains featured include DART services, NIR diesel electric railcars operating passenger trains to Londonderry, IE container trains and, briefly, the steam hauled ballast trains on the Bleach Green to Antrim line. There are several shots of the latest Japanese -built railcars operating suburban services on the Sligo line.

We will ask which DVDs you want to order, or if you put that in the email it will speed things up.

We will then send you a Paypal invoice to allow you to pay by Paypal or credit card or debit card.

Or just send us an e-mail to marklejim@aol.com and ask for details. Click the page you wish to see from the table below.
If you wish to contact Markle Associates Video:

Send us an email to the address on the Markle Home Page, making it clear please in the message title that you are responding from this web page, or write to: